In mid-1977, General Excavating demolished four buildings on the east side of Phillips Avenue between Eighth and Ninth streets. This was approaching the tail end of urban renewal, a program in which areas of a city considered to be rundown were destroyed to promote fresh development and eliminate blighted areas.

The face of downtown Sioux Falls was greatly changed by urban renewal. Across the street, the Cataract Hotel and every other building on the block bounded by Eighth and Ninth streets and Phillips and Main avenues were torn down to make way for the new Northwestern Bank building and parking ramp. 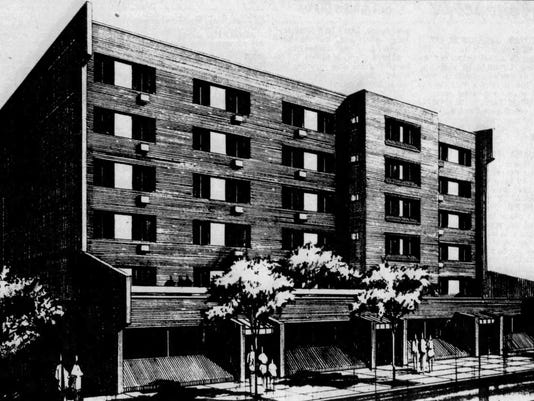 The east side of Phillips had great old buildings that were knocked down to make way for the Huey Building. To be fair, the Huey is an interesting, if overlooked, modern building. Its construction was announced in August 1977. Ward Whitwam & Associates was retained for the design of the building, and Sioux Falls Construction would build it. It would be six floors and include substreet-level parking. The ground level would be used for office space, while the upper floors would include 46 housing units for low to moderate income seniors.

The $1.3 million project was developed by the H&C Partnership, consisting of Bill Huey and Joe Cadwell. The housing there would be government-subsidized for a period of 40 years. The building was expected to be ready in 1978.

One encounter involved one of his repo subjects pointing a gun at him. Huey wrestled the gun away from the man. This action lacerated the man’s finger on the trigger guard. After disarming the man, Huey took him to the hospital for stitches, then to jail to have him arrested for assault. In an interesting turn, he then posted the man’s bail and took him home. They became friends in the years since.

Huey repossessed cars, furniture, appliances and even businesses. Some were reluctant to give up the things they’d fallen behind on; others were more willing. Some business owners had shown relief that their continued downward spiral had come to an end. One man came into his office and handed over his car keys and title. For the majority of the time he was in business, Huey’s encounters with violence were rare. He was understanding and reasonable to deal with. The empathy Huey showed his fellow humans often resulted in returned empathy for the position they had put him in.

Bill Huey’s partner, Joe Cadwell, was a Sioux Falls lawyer who in 2016, at age 96, celebrated 75 years in the state bar association.

In July 1988, a grease fire on the second floor of the Huey building forced seniors to vacate as fast as they could. Firefighters had to assist tenants who couldn’t get out on their own. The building’s sprinkler system put out most of the fire, and the firefighters put out the rest. Most residents were able to return to their apartments by the end of the day.

Huey got out of the pawn business in 1978 and the liquidation business in 1995, focusing on consulting for banks as an appraiser. He owned several other apartment buildings in the area. He died in 2007, leaving a downtown building named for him.

The Huey this year celebrates its 40th birthday. Unfortunately, this means the seniors now living there in subsidized apartments must find another place to go. The building will be redeveloped to add more sparkle to downtown.